Trump blows all 8 gaskets: ‘Send her back!’

At first rally since announcing re-election bid, US president intensifies criticism of four Congresswomen of colour. The US president termed the four women legislators as un-American at a rally in Greenville, North Carolina [Gerry Broome/AP Photo]

Raucous crowds chanted “Send her back!” as US President Donald Trump stepped up attacks against four Democratic Congresswomen of colour, including Somali-born Ilhan Omar of Minnesota, at his first campaign rally since announcing his 2020 re-election bid.

Trump termed the four legislators as un-American at the gathering in Greenville, North Carolina, on Wednesday and said they should leave the United States if they did not like his policies on issues such as immigration and defence of Israel.

“Tonight I have a suggestion for the hate-filled extremists who are constantly trying to tear our country down. They never have anything good to say. That’s why I say: ‘Hey, if they don’t like it, let them leave. Let them leave’,” he said to a roaring crowd.

The US president had tweeted over the weekend that the four representatives – who also include Alexandria Ocasio-Cortez of New York, Rashida Tlaib of Michigan and Ayanna Pressley of Massachusetts – should “go back” to where they came from, even though all are US citizens and three are US-born.

The Democratic-controlled House of Representatives on Tuesday voted to condemn those remarks as racist.

Pushing back at the criticism, Trump insisted he does not “have a racist bone in my body!”

Taking aim at Omar, he said: “She looks down with contempt on hard-working Americans saying ignorance is pervasive in many parts of this country.”

The crowds, decked out in the colours of the US flag and “Make America Great Again” caps, responded with the chant – “Send her back! Send her back!”

“The way they speak so badly of our country,” Trump continued. “They want to demolish our constitution. Eliminate the values that built this magnificent country.”

Omar responded on Twitter with a poem from US author and civil rights champion, Maya Angelou.

“You may kill me with your hatefulness, But still, like air, I’ll rise,” she wrote.

Al Jazeera’s Kimberly Halkett, reporting from Greenville, said the US president was pushing back against the criticism over his tweets, “saying that the argument that he is racist is simply unfounded”.

“Trump is appealing to American pride as he not only tries to hold onto his base here in New Carolina but also use some of the racial divisions in the US to win over new voters,” she said.

In advance of Tuesday’s rally, Trump tweeted a video that featured patriotic scenes of the president meeting Americans, with frequent images of the US flag. It ended with the slogan: “America – One Squad Under God.” 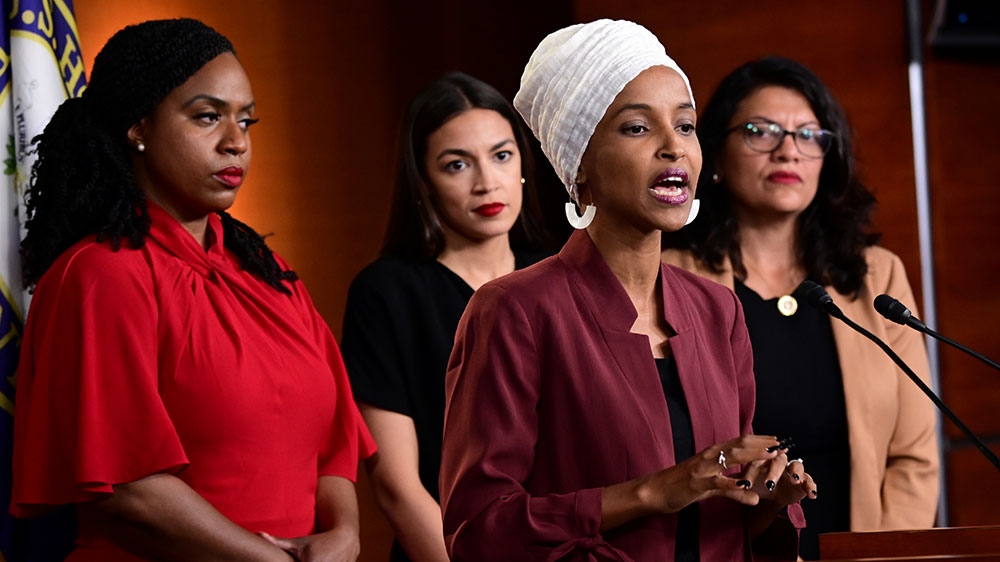 The vilification of the four legislators follows a well-worn path for Trump, who called for a ban on Muslims entering the US during his 2016 campaign. His proposal drew widespread criticism at the time, but Republicans overwhelmingly supported it, and it was a factor in his victory that year.

Former Vice President Joe Biden, the frontrunner for the Democratic 2020 presidential nomination, weighed in against Trump’s remarks against the four legislators on Twitter.

“These members of Congress – children of immigrants, just like so many of us – are an example of exactly what makes America great,” Biden said.

So, Mr. President, I am here to tell you this. This is OUR country: The United States of America. You'll never understand what makes us strong. And that's why the American people are going to vote you out of office next year.

Senator Bernie Sanders, who is also vying for the Democratic nomination, condemned Trump, calling him the “most dangerous president in the history of our country”.

#IStandWithIlhan and am proud to work with her in Congress.

Trump is stoking the most despicable and disturbing currents in our society. And that very hatred and racism fuels him. We must fight together to defeat the most dangerous president in the history of our country.

While the rhetoric has enraged liberals, just four Republicans voted with the 235 Democrats on Tuesday night to condemn Trump for “racist comments that have legitimised and increased fear and hatred of new Americans and people of colour”.

According to a Wednesday poll from USAToday/Ipsos, two-thirds of respondents judged that telling minority Americans to “go back to where they came from” is racist.

However, initial indications suggest the episode has not hurt Trump’s support among Republicans: His approval rating has risen five points to 72 percent, according to a new Reuters/Ipsos poll.

And the issue of immigration – which was core to Trump’s 2016 campaign, and will be again in 2020 – continues to strike a powerful chord.

A Pew study released Wednesday showed that 57 of Republicans feel America risks “losing our identity as a nation” if it is too open to immigrants.