A MAGA Bomber? What a joke!

We were wondering what the October Surprise would be. This is it.

Authorities have made an arrest in Florida regarding the string of mail bombs targeting Democrats that have been discovered over the last few days. The suspect has been identified as Cesar Sayoc, (aka Cesar Alieri or Cesar Altieri Randazzo), a man with an extensive record, including a 2002 bomb threat and other charges up to 2015, as well as a bankruptcy filing in 2012, who registered Republican in 2016. Early reports showed a van plastered with pro-Trump political stickers and slogans being towed away by authorities. I guarantee you however, that this was a setup hatched by Democrats to shore up their flagging support as we head to the elections now less than two weeks away.

The entire operation is just too obvious.

Twelve bombs were sent to some of the most prominent Democrats in the news today, timed to arrive within days of one another, at the height of election season where the story would dominate the news cycle. The sender made little effort to hide the suspicious nature of the packages. In fact, they screamed “examine me, I’m suspicious.” They were also made to appear crude and stupid. Many words were misspelled, but how does such a person then manage to coordinate the timing so well that multiple packages would show up within days of each other in New York, Florida and California?

Many bomb experts have concluded that, while the bombs have the components needed to meet the “bomb” definition, that they couldn’t detonate and perhaps were deliberately made that way. The New York Times quotedother experts who said they looked “fake”:

Some bomb technicians who studied photos of the device that circulated on social media suggested that the bomb sent to CNN had hallmarks of fake explosives — the kind more typically depicted on television and in movies, rather than devices capable of detonating.

A digital clock was taped to the middle of the pipe, a feature that experts say is typically shown on fictional bombs in an attempt to ratchet up dramatic tension, but unnecessary in real life.

It was a foregone conclusion early on that whoever did this would be caught. He left just too much evidence. And his van literally screams “I am a rightwing nutjob.” It is brand spanking new. How could a poor, bankrupt guy allegedly living in his mother’s basement or in the van itself afford such a vehicle? The pro-Trump stickers are not stickers at all, but professionally-created, poster-sized collages designed to perfectly fit in each one of the van’s windows. And all the van’s windows are covered in them except the front driver’s side window and the windshield. 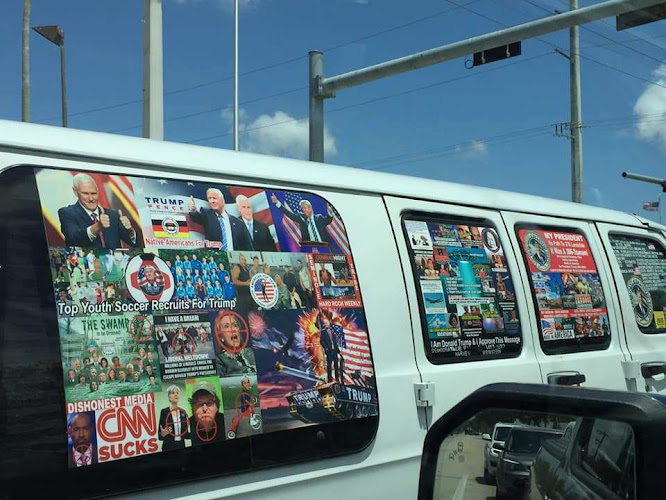 The reaction from Democrats was another tell. They were ready the minute the story hit – some even before it hit. John Brennan predicted that more bombs were coming because he hadn’t gotten one. The next day he did. When CNN received its bomb, instead of running for cover and calling authorities, they took photos of it. Alexander Soros was even able to get an OpEd printed in the New York Times the same day the Clinton/Obama bombs were found. How did he manage that without prior knowledge?President Trump was immediately blamed for creating an atmosphere of “incivility” that motivated some right-wing nut to go after Democrats with bombs. Logically, that doesn’t square, because his rallies have uplifted and motivated people to vote, not enraged them with feelings of powerlessness that might inspire some nutjob with the same psychological profile as the Democrats’ baseball game shooter, James Hodgkinson. But logic has never been Democrats’ strong point. Subversion and duplicity however, is.

Unlike Republicans, who have to scramble for campaign dollars, the Left base is comprised of numerous billionaires, like George Soros and Tom Steyer, willing to shower money on leftwing candidates and causes, and who have shown themselves to be completely free of any ethical constraints. Some of these same individuals and groups were behind the Caravan financing and the Kavanaugh protests.

* * *
Here is what happened. The highly-organized, paid, Democrat opposition to the appointment of Justice Kavanaugh backfired, mobilizing the GOP base. The next effort was the Honduran Caravan, organized by Central and South American leftists (who collude with the American Left regularly), and financed by Soros and other big-dollar leftists. That has backfired too, and now many in the caravan are heading home, according to a Fox News report this morning.

This latest effort is the Democrats’ “October Surprise.” It has likely been long-planned but held in reserve as a last-minute Hail Mary pass if other efforts failed. They have found a patsy and offered him huge dollars to do this, knowing he would be caught because that was the point. He only registered Republican in 2016. He is likely a Democrat plant who developed a two-years long “conservative” track record to establish credibility. This is how undercover operatives work, and they exist on both sides of the aisle, although the Left has a lot more of them because the Left can afford to. Either way, this person knew going in that he would be arrested and possibly face a long-term jail sentence. He also knew he would receive ample compensation. 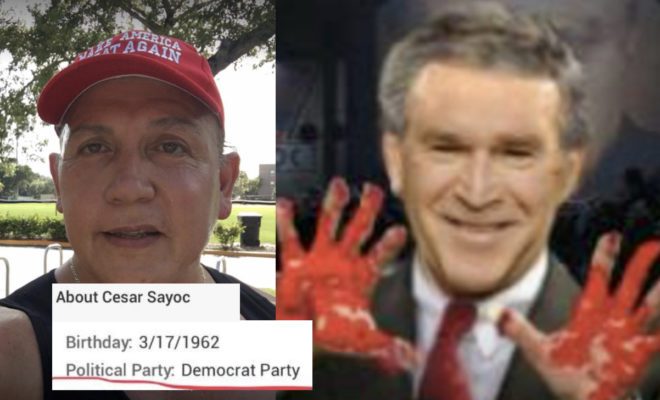 Veteran reporter and talk show host Shad Olson has written a brilliant analysis of Sayoc based on social media posts that show a far left activist who over the past two years tried to reinvent himself as a hardcore Trump supporter. That post, as far as I’m concerned, nails it.

People call such nonsense “conspiracy theories,”and “tin hat” stuff. Well, Democrats live in a fever swamp of conspiracy theories regarding their enemies and are famous for accusing Republicans and conservatives of it every day, most famously Hillary Clinton’s “vast right-wing conspiracy” comment. Like the guilty spouse, they accuse their partner of cheating. They are simply projecting what they do. But when someone else accuses them of some kind of conspiracy, we are all crazy.

Average, everyday people are unfamiliar with the deeply subversive nature of today’s Democrat Party. At its heart, it is nothing short of a domestic enemy fifth column led by hardcore Communists dedicated to overthrowing and destroying the nation we know and love. Consider what we endured during the eight years of President Obama’s reign of terror:

Trump/Russia Investigation Launched by the Obama administration in coordination with the Hillary Clinton campaign, with complicity right up to President Obama himself. This is a more fantastic, true story than the most imaginative spy fiction. The Trump/Russia investigation scheme was initiated in March 2016 by Democrat operative Alexandra Chalupa, who began investigating Trump as far back as 2015.

Fast ‘n Furious A gun-running scheme whereby the Eric Holder Justice Department underwrote firearms sales to Mexican cartels. They claimed that they hoped to trace those guns to cartel members. But internal documents show it was as much an effort to discredit American gun ownership. Meanwhile those very guns were used to border Patrol agent Brian Terry, and execute hundreds of Mexicans.

IRS Targeting An unprecedented targeting of American citizens that collectively comprised the most effective political opposition to the Left — handing Democrats the most devastating defeats in elections at all levels in 2010.

Benghazi Attacks Obama administration accused a film maker of triggering the Benghazi attacks, which it had advance warning were about to occur. Talk about an implausible conspiracy theory.

Arab Spring Assisted by the State Department and designed to turn the Middle East into a cauldron of instability. Worked beautifully.

There are many more, but you get the drift. The modern Democrat Party is the heart of deep state opposition to President Trump, conservatives, and our constitutional republic. They are capable of doing anything to win. This is their October Surprise. Make sure you vote.