Solaren Corp.  is based in Manhattan Beach, CA. They  holds two patents for transmitting microwave directed energy from space to pinpoint locations on earth.

1 – Under patent US7612284B2 , a solar-powered satellite will generate a powerful microwave radio frequency beam focused on an array of collector antennas where it will be transformed to electrical power supplied to PG&E (Pacific Gas and Electric)

2- Under patent US20110204159A1, a solar-powered satellite will generate a powerful microwave radio frequency beam to control the weather by heating deployments of aluminum oxide or other conductive particulates, sprayed from aircraft.  The patent describes methods of steering and changing the intensity of a hurricane.

The Guardian: It was reported on April 16, 2009 that a California solar energy firm – Solaren – plans to construct “orbiting solar farms” that will harvest electricity in space. Each “farm” would be a set of solar panels in outer space that would beam enough clean energy back to Earth to power half a million homes.  Solaren’s specific plans (Patent US7612284B2) are to put an array of solar panels around 22,000 miles above the earth’s equator using existing rocket technology and then convert the power generated into microwave radio-frequency transmissions. The microwaves would be beamed back down to antennae in Fresno, California and then converted into electricity and fed into the PG&E power grid. Mirrors would focus sunlight on solar cells, generating electrical power. The electricity would be converted into microwaves suitable for transmitting through Earth’s atmosphere at frequencies of 2.45 or 5.8 GHz.  For comparison, 2.45 GHz is the same frequency as your kitchen microwave, Wi-Fi, Blue tooth etc.  (More)

An interesting coincidence involves what could be called  ‘Russian collusion’.   On August 12, 2016 the Russian Federation’s Federal Service for Intellectual Property announced the issuance of a key Space Solar Power (SSP) system patent to Solaren Corporation.  This suggests that Russia is developing – or has already deployed an SSP and that Solaren required technical help from Russia in order to contract service to PG&E.

The coincidence continues when a 2011 email form a PG&E officlal, Brian K Cherry,  announced the antenna receptor site would be moved from the Mojave desert to Sebastopol.

Sebastopol is an unincorporated community in Nevada County, California. It was named during the Crimean War (1853-56) after Sevastopol in the Russian Empire.  (Key words: Manhattan, Nevada, Russia

An excellent video by Christopher Barnatt  presents three methods of sending energy from space satellites down to earth as either microwave or laser directed energy.

A 2009 Video by Mike Hoffman currently with PNNL In a 1978 meeting with Boeing, Mike recalled that a company official suggested the microwave downlink could be weaponized by focusing the RF energy into an area as small as a one square meter.  Mike asked the Boeing official if the Soviet Union (now Russia) would allow the US to put up a satellite system like that.(?)

In 2003, Donald Rumsfeld and General Meyers responded to media questions on development of laser and high powered microwave (HPM) weapons.  Notice the unease of body language when General Meyers reaches for his neck at the mention of “High Powered Microwaves” – a likely signal for the press to stop asking questions. 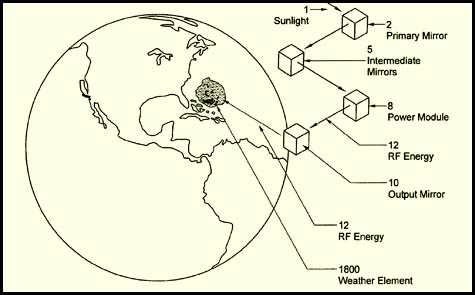 [Image: From a February 2006 patent application by Solaren, proposing that terrestrial weather systems might be controlled by mirrors in space]. 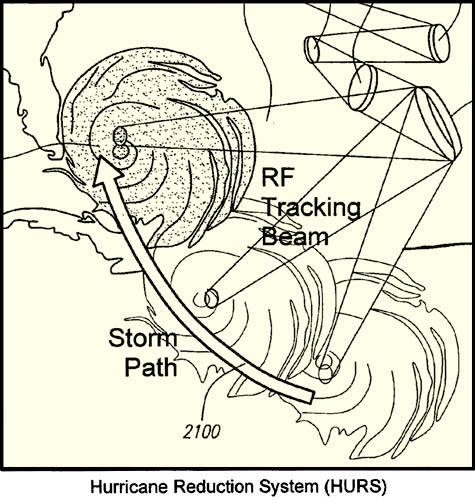 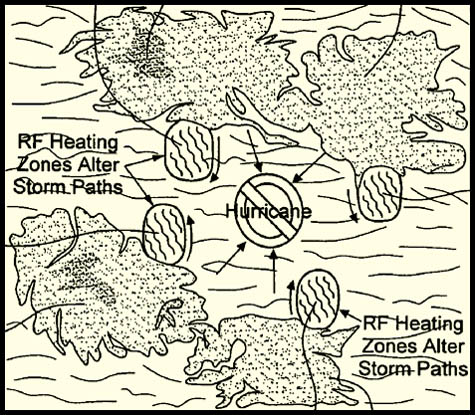 [Images: From Solaren‘s February 2006 patent application].
Using a complicated geometry of spaceborne mirrors – seen in the diagrams below – in tandem with meteorological tracking technology, this device would give Solaren the ability to control the weather.
Or, as the patent application itself explains, it would be a “Space-based power system and method of altering weather using space-born energy”:

Weather control has become a topic of near-constant interest for me. As I suggested the other night in my talk at the SVA – and as I also explore in The BLDGBLOG Book – weather control could very well be the future of urban design; in other words, cities might very realistically attempt to engineer specialty microclimates – similar to Beijing‘s Olympic efforts at weather control last summer – as a new means of attracting new residents and future development.
What’s fascinating about Solaren’s proposal is that it seems entirely possibly that, for instance, Dubai, attempting to recapture the international imagination, might put into orbit a private, geostationary solar farm with which that city could not only power its delirious experiments in beach refrigeration and large-scale air-conditioning, but actually create a new climate for the city. 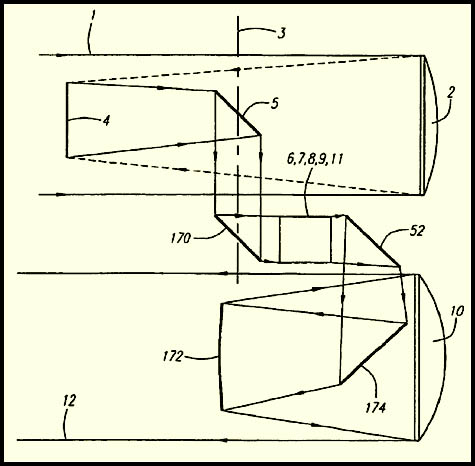 [Image: A geometry of mirrors in space, from Solaren‘s February 2006 patent application].
That, of course, or it’s just Real Genius all over again: after all, why use this technology only for stopping hurricanes when you could melt an opposing army’s tanks or even assassinate someone through a brief application of solar overload? We’ll just militarize Apollo, bringing astronomical power down upon our enemies, causing storms of fire in distant cities, evaporating reservoirs, and turning glaciers into roaring torrents of weaponized floodwaters. 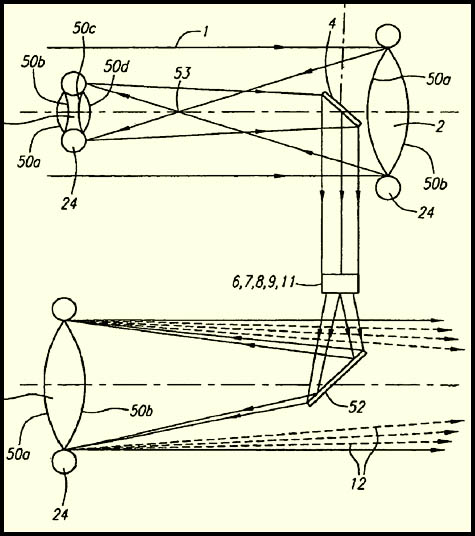 [Image: From Solaren‘s February 2006 patent application].
In an endlessly fascinating article published two years ago in The Wilson Quarterly, historian James R. Fleming describes – among many other things – how a “weather race with the Russians” was fought on the level of climatological R&D between the U.S. and U.S.S.R. during the Cold War.
For instance, “In the 1940s,” Fleming writes, “General George C. Kenney, commander of the Strategic Air Command, declared, ‘The nation which first learns to plot the paths of air masses accurately and learns to control the time and place of precipitation will dominate the globe.’”
Indeed, the U.S. military ultimately hoped that it might learn how to “alter the global climate for strategic purposes,” something which not only involved “using weather as a weapon of warfare,” but “using controlled precipitation as a delivery system for biological and radiological agents.” You could snow anthrax, say, onto the streets of belligerent cities unaware of the infections drifting down from above.
But perhaps all they need is a strange new constellation of mirrors – a remote-controlled blur of light that moves against the stars it’s surrounded by – to hurl typhoons against China or destroy a whole civilization’s agricultural base from above.
Toward the end of his article, Fleming asks:

Assume, for just a moment, that climate control were technically possible. Who would be given the authority to manage it? Who would have the wisdom to dispense drought, severe winters, or the effects of storms to some so that the rest of the planet could prosper? At what cost, economically, aesthetically, and in our moral relationship to nature, would we manipulate the climate?

Of course, having said all that, I don’t mean to imply that Solaren’s weather control system is some kind of paranoiac Doomsday Device; but anyone who learns to stop – or, more to the point, conjure up – hurricanes from space will nonetheless be sitting on an unimaginably powerful technology.
(Via Alexis Madrigal – who signed a contract for his first book yesterday. Congrats, Alexis!)