In recent years, the parents of Jared Kushner – the son-in-law and trusted confidant of President-elect Donald Trump – have donated tens of thousands of dollars to organizations and institutions located in the West Bank settlements, according to their tax forms.

The U.S. State Department has long held that the settlements are an impediment to peace. During the election campaign, however, Trump’s key advisers on Israel challenged this position.

On average, the family donates a few million dollars a year to charitable causes through the Charles and Seryl Kushner Foundation, tax forms for the years 2010 through 2014 show. The average donation is typically in the range of $5,000 to $10,000. Jared Kushner – as well as his brother and two sisters – sits on the board of his parents’ family foundation, which was created in 1997. 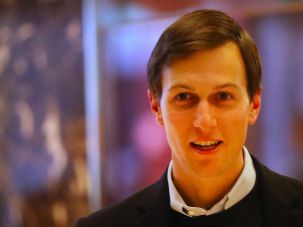 Is Jared Kushner on the Verge of Becoming Donald Trump’s ‘De Facto President’?

The president of American Friends of Beit El Yeshiva, whose offices are located in Forest Hills, New York, is David Friedman, Trump’s senior adviser on Israel affairs. Friedman, who has served as Trump’s real estate lawyer for the past 15 years and is considered to be very close to the president-elect, has expressed interest in being the next U.S. ambassador to Israel.

Also seen as a top contender for that post is Mike Huckabee, the former Arkansas governor and presidential candidate, who was also keynote speaker at last year’s fund-raising dinner for the Beit El Yeshiva American friends group.

Another Kushner charity beneficiary located beyond Israel’s internationally recognized border is the Etzion Foundation, whose U.S. fund-raising offices are located in Teaneck, New Jersey. The foundation supports Yeshivat Har Etzion, Kibbutz Migdal Oz and the Herzog College teachers’ training institution – all located in the Gush Etzion settlement bloc outside Jerusalem. In 2012, the Kushner family foundation donated $5,000 to the Etzion Foundation, and in 2013, another $10,000.

Another recipient of Kushner funding in Gush Etzion is Ohr Torah Stone, which received $5,000 in 2011. Headquartered in the settlement of Efrat, Ohr Torah Stone runs a network of high-school, college and graduate programs both in Israel and the United States. The institution was founded by Shlomo Riskin, the American-born rabbi of Efrat and a prominent figure in Modern Orthodoxy.

Following last month’s U.S. election, Riskin was criticized by Jewish progressives for welcoming Trump’s victory. In an interview with Israel’s Arutz Sheva, the settler-backed radio station, Riskin attacked President Barack Obama for not recognizing the legitimacy of the large settlement blocs, such as Gush Etzion, and said: “Trump speaks very differently about Israel and our prime minister and supports the need to transfer the U.S. embassy here to Jerusalem, so I have a lot of hope.”

Another settlement enterprise that recently received money from the Kushner family, albeit a small amount of $500, was the radical Od Yosef Chai yeshiva in Yitzhar. This particular yeshiva has served as a base for launching violent attacks against nearby Palestinians villages and Israeli security forces, as well; as a result, it no longer receives funding from the Israeli government.

In recent years, the Kushners’ pet project in Israel has been the Shaare Zedek Medical Center. In 2014, the family pledged $18 million to the Jerusalem hospital, in addition to $2 million it had already committed. The Kushners have a history of supporting hospitals – both in Israel and the United States – but this was by far the largest gift given by the family to a single medical institution.

Another key beneficiary of Kushner charity in Israel is the Israel Defense Forces. Between 2011 and 2013, the foundation donated a total of $315,000 to Friends of the IDF, the army’s U.S. fund-raising arm. Jared Kushner serves on the organization’s board.

Among other institutions and organizations the Kushners have supported in Israel in the past four years, for which detailed breakdowns exist, are the Israeli Philharmonic Orchestra ($2,500); the Bezalel Academy of Arts and Design ($1,000); United Hatzalah ($70,000); the Israel Cancer Research Fund ($10,000); Meir Panim Lachayal, another organization that supports IDF soldiers ($4,000); the Shalva Children’s Center ($20,000); Ma’ayanei Yeshua Hospital ($25,000); and the Rabin Medical Center ($23,000).

In the United States, the family foundation supports many Jewish day schools, charities and cultural centers. In recent years, it has contributed close to $30,000 to various institutions operated by Chabad – the ultra-Orthodox outreach organization. One of the single largest beneficiaries of Kushner contributions in recent years has been The Ramaz School in Manhattan. During each of the last four years for which tax information is available, the elite yeshiva day school received $250,000 from the family foundation. Haskel Lookstein, the former principal of Ramaz and a prominent modern Orthodox rabbi, supervised the conversion of Donald Trump’s daughter Ivanka before she married Jared Kushner.

In 2013, Kehillat Jeshurun, the Upper West Side congregation established by Lookstein, to which Jared Kushner and Ivanka Trump belong, received a contribution of $20,000.