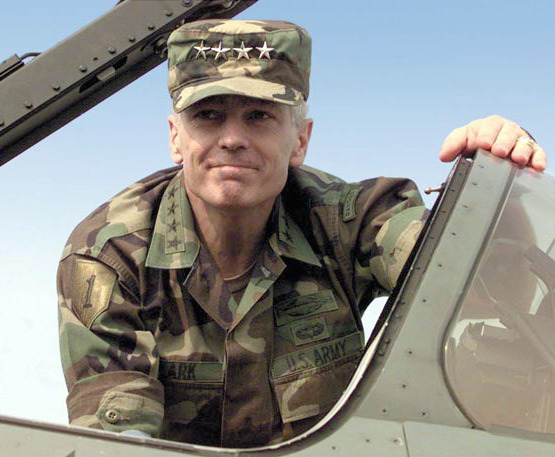 We’re going to take out seven countries in five years, starting with Iraq, and then Syria, Lebanon, Libya, Somalia, Sudan and, finishing off, Iran.

Clark is a former four-star general. He served as Supreme Allied Commander of NATO during the conflict in the former Yugoslavia.

[AMY GOODMAN]
Do you see a replay in what happened in the lead-up to the war with Iraq — the allegations of the weapons of mass destruction, the media leaping onto the bandwagon?

[GEN. WESLEY CLARK]
Well, in a way. But, you know, history doesn’t repeat itself exactly twice. What I did warn about when I testified in front of Congress in 2002, I said if you want to worry about a state, it shouldn’t be Iraq, it should be Iran. But this government, our administration, wanted to worry about Iraq, not Iran.

I knew why, because I had been through the Pentagon right after 9/11. About ten days after 9/11, I went through the Pentagon and I saw Secretary Rumsfeld and Deputy Secretary Wolfowitz. I went downstairs just to say hello to some of the people on the Joint Staff who used to work for me, and one of the generals called me in. He said, “Sir, you’ve got to come in and talk to me a second.” I said, “Well, you’re too busy.” He said, “No, no.” He says, “We’ve made the decision we’re going to war with Iraq.” This was on or about the 20th of September. I said, “We’re going to war with Iraq? Why?” He said, “I don’t know.” He said, “I guess they don’t know what else to do.” So I said, “Well, did they find some information connecting Saddam to al-Qaeda?” He said, “No, no.” He says, “There’s nothing new that way. They just made the decision to go to war with Iraq.” He said, “I guess it’s like we don’t know what to do about terrorists, but we’ve got a good military and we can take down governments.” And he said, “I guess if the only tool you have is a hammer, every problem has to look like a nail.”

So I came back to see him a few weeks later, and by that time we were bombing in Afghanistan. I said, “Are we still going to war with Iraq?” And he said, “Oh, it’s worse than that.” He reached over on his desk. He picked up a piece of paper. And he said, “I just got this down from upstairs” — meaning the Secretary of Defense’s office — “today.” And he said, “This is a memo that describes how we’re going to take out seven countries in five years, starting with Iraq, and then Syria, Lebanon, Libya, Somalia, Sudan and, finishing off, Iran.” I said, “Is it classified?” He said, “Yes, sir.” I said, “Well, don’t show it to me.” And I saw him a year or so ago, and I said, “You remember that?” He said, “Sir, I didn’t show you that memo! I didn’t show it to you!”

[AMY GOODMAN]
I’m sorry. What did you say his name was?

[GEN. WESLEY CLARK]
I’m not going to give you his name.

[AMY GOODMAN]
So, go through the countries again.

[GEN. WESLEY CLARK]
Well, starting with Iraq, then Syria and Lebanon, then Libya, then Somalia and Sudan, and back to Iran. So when you look at Iran, you say, “Is it a replay?” It’s not exactly a replay. But here’s the truth: that Iran, from the beginning, has seen that the presence of the United States in Iraq was a threat — a blessing, because we took out Saddam Hussein and the Baathists. They couldn’t handle them. We took care of it for them. But also a threat, because they knew that they were next on the hit list. And so, of course, they got engaged. They lost a million people during the war with Iraq, and they’ve got a long and unprotectable, unsecurable border. So it was in their vital interest to be deeply involved inside Iraq. They tolerated our attacks on the Baathists. They were happy we captured Saddam Hussein.

But they’re building up their own network of influence, and to cement it, they occasionally give some military assistance and training and advice, either directly or indirectly, to both the insurgents and to the militias. And in that sense, it’s not exactly parallel, because there has been, I believe, continuous Iranian engagement, some of it legitimate, some of it illegitimate. I mean, you can hardly fault Iran because they’re offering to do eye operations for Iraqis who need medical attention. That’s not an offense that you can go to war over, perhaps. But it is an effort to gain influence.

And the administration has stubbornly refused to talk with Iran about their perception, in part because they don’t want to pay the price with their domestic — our US domestic political base, the rightwing base, but also because they don’t want to legitimate a government that they’ve been trying to overthrow. If you were Iran, you’d probably believe that you were mostly already at war with the United States anyway, since we’ve asserted that their government needs regime change, and we’ve asked congress to appropriate $75 million to do it, and we are supporting terrorist groups, apparently, who are infiltrating and blowing up things inside Iraq — Iran. And if we’re not doing it, let’s put it this way: we’re probably cognizant of it and encouraging it. So it’s not surprising that we’re moving to a point of confrontation and crisis with Iran.

My point on this is not that the Iranians are good guys — they’re not — but that you shouldn’t use force, except as a last, last, last resort. There is a military option, but it’s a bad one.