Just when you thought these relentless false flag mass shootings couldn’t get any crazier!

They’re always willing to carry water for the NWO crowd, especially
the political class and any big advertiser who weighs in on any given
matter .

The NYT will disseminate any ridiculous and/or false rumor, even
when it radically deviates from “All the News That’s Fit to Print.”

The relevant story has been posted in its entirety below. 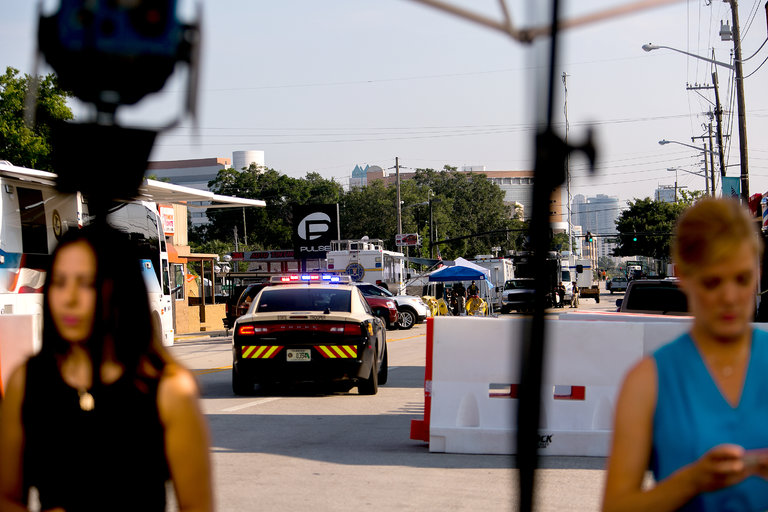 Law enforcement officials and television reporters at the scene of the shooting at the Pulse nightclub in Orlando, Fla., on Wednesday. CreditSam Hodgson for The New York Times

JENSEN BEACH, Fla. — The gunman who committed the massacre at a popular gay nightclub in Orlando used multiple Facebook accounts to write posts and make searches about the Islamic State. “Now taste the Islamic state vengeance,” he declared, denouncing “the filthy ways of the west.” He even searched for references to the massacre while he was carrying it out, a United States senator said.

In his posts, the gunman, Omar Mateen, called on the United States and Russia to stop the bombing campaign against the Islamic State, the extremist group that controls parts of Syria and Iraq. He pledged allegiance to the group’s leader, Abu Bakr al-Baghdadi, and said, “may Allah accept me,” Senator Ron Johnson of Wisconsin wrote in a letter to Mark Zuckerberg, Facebook’s chief executive.

“You kill innocent women and children by doing us airstrikes,” Mr. Mateen wrote, according to the letter. “Now taste the Islamic state vengeance.” And in what Mr. Johnson described as the gunman’s final post, he wrote, “In the next few days you will see attacks from the Islamic state in the usa.”

Mr. Johnson, a Republican who leads the Homeland Security and Governmental Affairs Committee, wrote in his letter to Mr. Zuckerberg that officials had found that “five Facebook accounts were apparently associated with Omar Mateen.” The letter asked Facebook to share all data on accounts tied to the gunman.

Mr. Mateen frequently used Facebook to search for information on law enforcement agencies and terrorist groups, Mr. Johnson wrote. And on Sunday morning, during the siege at Pulse, “Mateen apparently searched for ‘Pulse Orlando’ and ‘Shooting.’”

More information came to light Thursday about Mr. Mateen’s troubled work and school history, and about his actions leading up to the slaughter at Pulse nightclub on Sunday that left 49 people dead and 53 wounded in the worst mass shooting in United States history.

In the weeks before the shooting, Mr. Mateen, 29, went to a gun store here in Jensen Beach, Fla., and tried to buy high-grade body armor and at least 1,000 rounds of ammunition, said a co-owner of the store, Robert Abell. He said the store, Lotus Gunworks, did not stock the type of armor sought by Mr. Mateen, who lived nearby, and a salesman grew suspicious of Mr. Mateen’s behavior during a visit that lasted perhaps five minutes, including a telephone conversation he conducted in a foreign language, and refused to sell him bulk ammunition.

“Something in his gut told him it was wrong,” Mr. Abell said of the employee. He said the store contacted the F.B.I., but had no information by which to identify the customer; only after the killings did an employee recognize Mr. Mateen, who used an assault rifle and a handgun in the attack.

“Unfortunately, nobody connected the dots, and he slipped under the cracks, and this is where we’re at now,” he said.

School records released under public records requests showed that Mr. Mateen, who was born in Queens and grew up in Florida, was frequently in trouble as a child, and struggled to keep pace academically, especially in the early grades. He was disciplined 31 times in elementary and middle school, with one report when he was in third grade including a sweeping list of concerns. He was “constantly moving, verbally abusive, rude, aggressive,” the report said, often put his hands on other students, disrupted class and engaged in “much talk about violence & sex.”

In high school, he was repeatedly suspended, for a total of 48 days, in a span of less than two years, and attended three different schools. The last suspension came two days after the Sept. 11, 2001, attacks. The Martin County School District found no detailed records of what prompted the penalty, said Kim Sabol, a lawyer for the district, but former classmates have told news organizations that he celebrated the attacks, sparking conflicts with other students.

In May 2001, when he was 14, he was suspended twice for fighting, and one of those times he was arrested, according to personnel records from his later work for the State Department of Corrections. In a note explaining the incident to the department, he wrote he was not taken to jail, and “the charge of battery was adjudicated and the charge of disturbing school function was dropped.”

From October 2006 to April 2007, Mr. Mateen worked for the Florida Department of Corrections as a corrections officer trainee, earning $1,123.35 every two weeks, according to state records. He was dismissed but the records do not say why, except that it was not for misconduct. He received middling scores on a performance evaluation.

He worked for a private security company, where, according to law enforcement officials and a former co-worker, he talked of killing people, and claimed to support or belong to Islamist extremist groups. He also expressed hatred of gay people.

The leader of the Orlando police SWAT team added new detail to accounts of the massacre and defended the handling of the siege, saying that a lot of people believe, wrongly, that “we weren’t doing anything for a long period of time.”

“From the beginning of this, officers were running inside and trying to save people,” Capt. Mark Canty said. “They were setting up around the outside trying to figure out how to get people out.”

Officers rescued helped people escape throughout a three-hour standoff, including removing an air conditioner from a wall to allow several people in one room to climb out.

Officials decided to storm the club after Mr. Mateen threatened to strap himself and hostages with explosives, which later turned out to have been a bluff. Law enforcement teams used explosives to try to blow a hole in the outer wall of the club, but they did not completely breach it. Then they used an armored vehicle to make a hole by ramming the building, but they had to do it repeatedly, Mr. Canty said, trying to find the spot where some people were trapped.

A battery pack that officers saw through the bomb squad robot camera — which led them to believe there were explosives inside — turned out to have been from an exit sign or a smoke detector, Mayor Buddy Dyer said.

Federal law enforcement officials said Thursday that the F.B.I. is increasingly skeptical of reports that Mr. Mateen was gay but “closeted,” that he had been visiting gay clubs or that he had used gay dating apps. The bureau has recovered the Samsung phone he used the night of the attack, and is trying to retrieve data from it.

Investigators believe his wife, Noor Zahi Salman, drove Mr. Mateen to Pulse within a week or two of the shooting, apparently to assess the target, the officials said. She has told agents that she tried to talk her husband out of mounting an attack, and Justice Department say it is not clear if she will face criminal charges.

Officials and eyewitnesses have said that during the siege at Pulse, Mr. Mateen, a son of Afghan immigrants, declared allegiance to Mr. al-Baghdadi.

Officials say he was influenced by radical propaganda that he found online, but so far have found no direct connection to any larger organization.

On Thursday, the Central Intelligence Agency director, John O. Brennan, gave a grim assessment of the prospects for more attacks. Though the Islamic State has been pushed back on battlefields in the Middle East, he said in testimony before the Senate Intelligence Committee, “our efforts have not reduced the group’s terrorism capabilities and global reach.”

The Islamic State is intensifying plans to attack in the West, he said, and continues to use propaganda to inspire “lone wolf” attacks like Mr. Mateen’s.