Smoke from the Maria Fire billows above Santa Paula, Calif., on Thursday, Oct. 31, 2019. Calmer weather allowed crews to increase containment on wildfires after a three-week siege of gusts fanned blazes across California and led utilities to cut power to prevent winds from blowing branches into electric lines and igniting an inferno. (AP Photo/Noah Berger)

A fast-moving fire broke out on Halloween night in Ventura County exploded to more than 8,000 acres overnight, prompting mandatory evacuation affecting at least 7,500 people. Many nearby school districts have cancelled classes due to this fire.

The Maria Fire is burning in a mountain area between Santa Paula and Somis, a ranching and farming community. The fight against the fire was hampered late Thursday when authorities grounded air support for the fire after a drone was discovered flying in the fire zone.

In better news, fire officials said they did not believe the Maria Fire would grow as large as 2017’s Thomas Fire that burned for nearly 40 days and ate throughabout 282,000 acres — or 440 square miles.

Based on the Maria Fire’s location, which started on a ridge, fire authorities said they believed the fire will run out of fuel at some point, burning at most about 12,000 acres.

The Maria Fire started just after 6 p.m. on South Mountain and authorities warned that the fire was spreading rapidly. It was 0% contained as of early Friday. The cause of the fire is under investigation. Crews continue to work amid dangerous weather conditions. A red flag warning was extended through 6 p.m. Friday, with winds expected up to 25 mph, with gusts of up to 35 mph, and single-digit humidity, according to the National Weather Service

“Offshore wind speeds are expected to peak at the fire location this morning when ridgetop winds will gust as high as 30 mph,” VCFD officials said.

RELATED: California Fires Are Getting Worse. What’s Going On?

Mandatory evacuation orders are in effect in the following area: Firefighters work to control flames from a backfire during the Maria Fire in Santa Paula on Nov. 1, 2019. (Josh Edelson/AFP via Getty Images)

In addition, Ventura County will be distributing N-95 masks at:

SCENES ON THE GROUND

In an orchard at the #MariaFire. Was told by Hector, the irrigation manager, that some avocado trees had burned down last night. There was a huge group of workers ready to go in and repair/adjust irrigation lines as the fire progressed away from the bulk of the property. 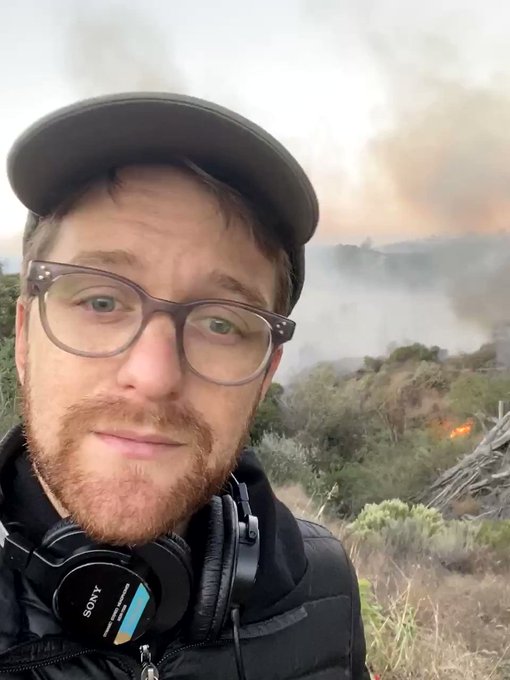 HOW WE’RE REPORTING ON THIS