TOTALLY CLUELESS! Biden Unrepentant About Every Offensive Action That Crossed the Line

Former Vice President Joe Biden told reporters on Friday that he’s not sorry for making inappropriate physical contact with people, including seven women who have accused him of making them highly uncomfortable after grabbing, kissing and making inappropriate comments about their physical appearance.

“I’m sorry I didn’t understand more,” Biden told reporters. “I’m not sorry for any of my intentions. I’m not sorry for anything that I have ever done. I have never been disrespectful intentionally to a man or a woman. So that’s not the reputation I’ve had since I was in high school, for god’s sakes.”

“The fact of the matter is I made it clear that if I made anyone feel (uncomfortable), I feel badly about that. It was never my intention. Ever,” said Biden – without apologizing.

Speaking on Friday to the International Brotherhood of Electrical Workers Construction Conference in Washington DC, Biden joked twice about inappropriate physical contact. Before beginning his speech, he quipped “I just want you to know. I had permission to hug Lonnie,” referring to IBEW president Lonnie Stephenson who had just introduced him.

Joe Biden: "I just want you to know, I had permission to hug Lonnie." https://t.co/Fz1XoY5IMv pic.twitter.com/BJZmeufHAj

Later, he invited a group of children up to the stage, put his arm around one of them, and said “By the way – he gave me permission to touch him.”

Former VP Biden invites children on stage during his speech at a construction conference, puts his arm around a boy, and makes light of recent news related to his physical interactions with people: "By the way, he gave me permission to touch him." pic.twitter.com/XN9YmaaS1b

The crowd of mostly older white men laughed at this. https://t.co/cHBeQESVqt

Biden has admitted that the accusations will “have to change somewhat how I campaign.” On March March 39 when former Nevada lieutenant governor nominee Lucy Flores alleged that Biden grabbed her, smelled her unwashed hair, and gave her a “big slow kiss” on the back of her head at a campaign event.

“I wanted nothing more than to get Biden away from me,” said Flores.

Biden issued a statement claiming he had no memory of “acting inappropriately,” followed by a two-minute-long video response in which he never says he’s sorry.

Meanwhile, Biden and the MSM have more or less glossed over the fact that it wasn’t just women that the former VP made feel uncomfortable. There are countless videos of him stroking, kissing, smelling and otherwise getting ‘grabby’ with children. 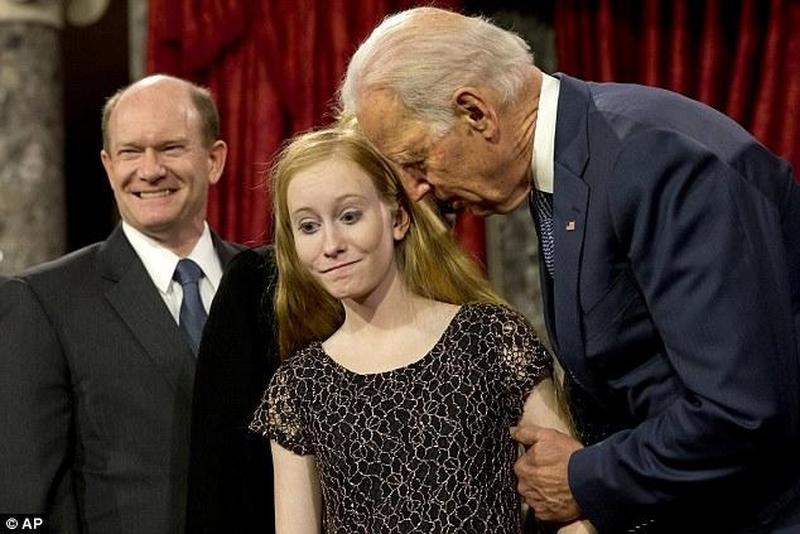