Update 2: Confirming that CNN was yet again fake news, moments ago the White House reported that, as McConnell said, President Trump will support the bipartisan spending bill that would avert another partial federal government shutdown, and will declare a national emergency to get more funding for his border wall.

“President Trump will sign the government funding bill, and as he has stated before, he will also take other executive action – including a national emergency – to ensure we stop the national security and humanitarian crisis at the border,” White House spokeswoman Sarah Sanders says in a statement.

“The President is once again delivering on his promise to build the wall, protect the border, and secure our great country.”

Meanwhile, as expected, the Democrats were up to arms, with House majority leader Nancy Pelosi immediately warning that she will review “legal options” if Trump declares an emergency, and Trump’s decision should be met with unease.

After some modest jitters earlier, the market now appears to be ignoring this particular narrative.

U.S. Senate Republican leader Mitch McConnell said on Thursday that President Donald Trump told him he would sign a bipartisan border security bill and at the same time declare a national emergency to make available additional funds for a wall along the southern border.

And while the news that Trump will sign the bill was initially seen as good news by algos, which sent the S&P to session highs, the realization that Trump would also proceed with an emergency declaration, widely seen as negative, has spooked some traders, and the market is now generally unchanged compared to where it was before the CNN report. 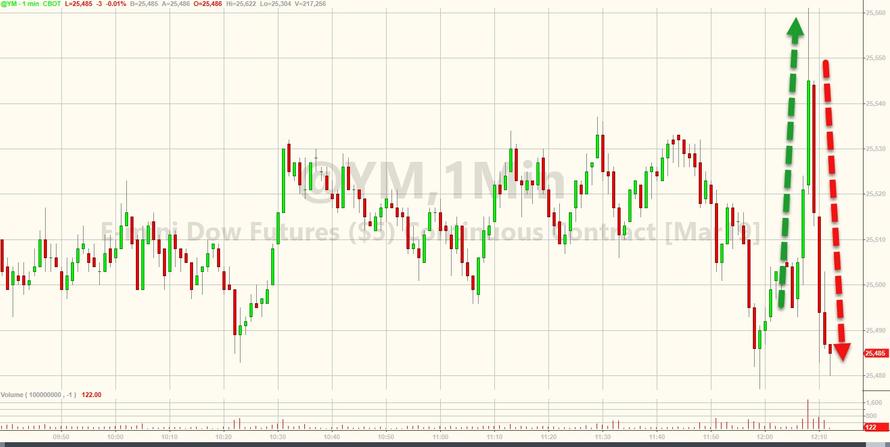 With the market convinced that not only Trump and Xi will magically pull out some trade deal out of their sleeve, or worst case, kick the can for 2 more months, and certain that Trump will not risk another government shutdown with just 24 hours left until a border funding deal has to be signed, suddenly storm cloud have emerged, with CNN reported that “Trump’s aides now say they are less certain he will sign a bipartisan spending compromise that doesn’t include the money he demanded for a border wall”, a major shift from earlier this week when officials indicated privately that he would, while looking to boost the wall funding through emergency measures.

As Congress prepares to vote on the measure, advisers say Trump has grown increasingly concerned about what’s contained in the 1,100-page legislation that was released late Wednesday evening, and which Trump said he would consider as long as it did not contain any “landmines.”

Meanwhile, as more details about the package have emerged, conservative figures in Trump’s orbit have voiced new displeasure at the bill, includes not just Ann Coulter, but also Fox host Laura Ingraham, who tweeted earlier Thursday that Trump should not sign it. The White House had attempted earlier this week to bolster support among Trump’s media allies.