And the Democrats tell us it’s not an invasion! (Video) 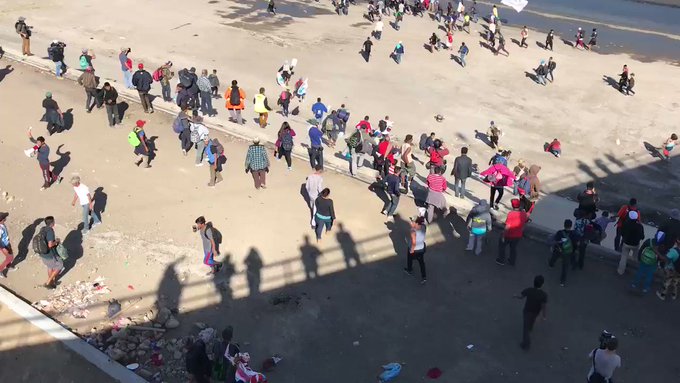 Officials closed the largest land crossing in North America on Sunday at San Ysidro as hundreds of migrants rushed the US border in an attempt to cross into the United States.

Migrants living in a makeshift shelter in Tijuana made a run for the San Ysidro border crossing, after reportedly becoming fed up with conditions, and walked approximately half a mile in an attempt to confront US authorities with asylum requests. After police blocked a bridge, the migrants crossed the Tijuana River on foot to approach the port.

Tear gas was deployed to break up a protest by the Central American migrants massed in Tijuana.

A small group broke off and headed a few hundred feet (metres) away to a part of a canal between Tijuana and San Diego that led to the border fence.

At that point, before the group had reached the border, U.S. Customs and Border Protest officers who had gathered on the other side of the fence launched canisters of what a Reuters reporter said felt and smelled like pepper

Protesters were caught between the Mexican and U.S. authorities. A young woman fell to the ground unconscious, and two babies cried, tears streaming from the gas.  –Reuters

After the first round of tear gas, migrants once again approached the border and were met with a further volley of cannisters.

Families crossing the river and after that a steep hike to the other side pic.twitter.com/UHvfx7dnic

Following the clash, US Customs and Border Protection closed all north and southbound vehicle traffic, along with pedestrian crossings at the port of entry.

Migrants at the Southern Border will not be allowed into the United States until their claims are individually approved in court. We only will allow those who come into our Country legally. Other than that our very strong policy is Catch and Detain. No “Releasing” into the U.S…

….All will stay in Mexico. If for any reason it becomes necessary, we will CLOSE our Southern Border. There is no way that the United States will, after decades of abuse, put up with this costly and dangerous situation anymore!