The Senate Judiciary Committee on Wednesday night released a time of their efforts to responded to various accusations against Supreme Court nominee Brett Kavanaugh – including two men who say they they were the basis for the “groping” allegation. The claims also include a new allegation from a San Diego woman who alleges that Kavanaugh and others raped her in the backseat of a car, though it does not specify the place, date or identities of the alleged accomplices.

Whoa. Senate Judiciary Committee Republicans say they have spoken to two men who think they, not Kavanaugh, had the 1982 encounter that formed the basis for her sexual abuse claim. (These tables are from a timeline the committee majority published 15 minutes ago.) pic.twitter.com/tjz3CSQUUL

Wow. To follow this timeline by judiciary committee is eye opening. Jud Comm lawyers interview 2 men who claim they maybe been assailant against Ford in 82. Investigate claims of assault by Kavanaugh's in RI in 85.Kavanaugh denies being in RI in 85.Anonymous letter from CA. Crazy https://t.co/kCixo38w8t

Democrats, who have already been furious over the handling of the investigation of these allegations, had not been told of the following interviews by GOP until info was publicly released tonight, per senior Democratic official. Ds had asked for all relevant evidence pic.twitter.com/AabHjf4TsQ

Last week, former Scalia clerk Ed Whelan floated a theory over Twitter in a series of now-deleted tweets, suggesting that Blasey Ford had confused Kavanaugh with another high school student who looked almost identical to him. Ford claims “there is zero chance that I would confuse him.” And earlier Wednesday, another Kavanaugh accuser – Julie Swetnick, had an ominous cloud of doubt cast over her allegation that the Supreme Court nominee and a friend were operating a date-rape “gang bang” operation at 10 high school parties she attended as a legal adult three years older than Kavanaugh (yet didn’t report once).

Politico reports that Swetnick’s ex-boyfriend, Richard Vinneccy – a registered Democrat, took out a restraining order against her, and says he has evidence that she’s lying.

“Right after I broke up with her, she was threatening my family, threatening my wife and threatening to do harm to my baby at that time,” Vinneccy said in a telephone interview with POLITICO. “I know a lot about her.” –Politico

“I have a lot of facts, evidence, that what she’s saying is not true at all,” he said. “I would rather speak to my attorney first before saying more.”

BREAKING: Julie Swetnick’s ex-boyfriend filed a restraining order against her: “She was threatening my family, threatening my wife, and threatening to harm my baby,” said Richard Vinneccy, “I know a lot about her. She’s not credible at all. Not at all.” —Politico

Avenatti called the claims “outrageous” and hilariously accused the press of “digging into the past” of a woman levying a claim against Kavanaugh from over 35 years ago.

Meanwhile, Swetnick has now been linked to Blasey Ford – as she utilized the law firm run by Ford to sue her previous employer, New York Life Insurance Co. for sexual harassment.

BREAKING: Julie Swetnick’s ex-boyfriend filed a restraining order against her: “She was threatening my family, threatening my wife, and threatening to harm my baby,” said Richard Vinneccy, “I know a lot about her. She’s not credible at all. Not at all.” —Politico 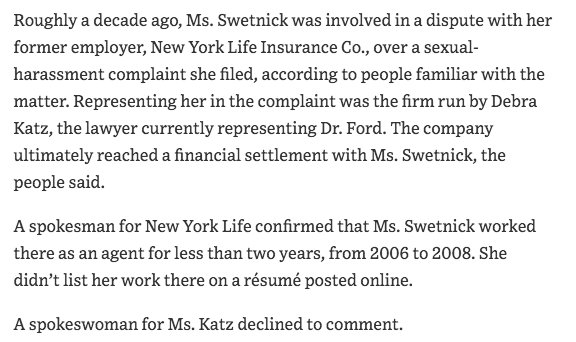 Ford and Kavanaugh are scheduled to testify before the Judiciary Committee on Thursday. If it even happens at this point, will one – or both of the “mystery gropers” make an appearance?