A Bribery Scheme or a Political Prosecution

The U.S. Attorney Initiates Yet Another Political Prosecution

SOTN Editor’s Note:
Like so many criminal charges of late, which have been filed against high profile figures from foreign countries, this one below smacks of political prosecution.  The Chinese businessman involved –Ng Lap Seng — has already been arrested.  John Ashe, from Antigua and Barbuda, appears to have been in the wrong place at the wrong time.  The same can probably be said for the rest of those who have been accused.

Anyone who reads this article will plainly see that the actual charges reflect business as usual, even in the U.S Congress.  The entire U.S Federal Government is conducts business around the globe in much the same manner — 24/7.   And, yet, the Obama Administration sicks their loyal attack dog –Manhattan U.S. Attorney Preet Bharara — on any individual who they have targeted.

The allegations are so transparently political that this case compares to the multiple political prosecutions the U.S. is pursuing against various FIFA executives, all of them having been initiated to depose Sepp Blatter, the current FIFA president.  Blatter biggest crime is that he treated Russia with fairness in the Olympic Games site selection process. The USA would have none of that when they’re so hellbent on demonizing Russian President Vladimir Putin.

Whenever the USA wants to bring of someone of stature down, they use the full force of their Criminal Justice System as though it is the model of fairness of the world.

U.S. authorities charged a former president of the United Nations General Assembly, a billionaire Macau real estate developer and four others on Tuesday for engaging in a wide-ranging corruption scheme.

John Ashe, a former U.N. ambassador from Antigua and Barbuda who was general assembly president from 2013 to 2014, was accused in a complaint filed in federal court in New York of taking more than $1.3 million in bribes from Chinese businessmen, including developer Ng Lap Seng.

Manhattan U.S. Attorney Preet Bharara, who announced the arrests of Ashe and the other defendants, said the investigation could result in more charges as authorities examine whether “corruption is business as usual at the United Nations.”

“If proven, today’s charges will confirm that the cancer of corruption that plagues too many local and state governments infects the United Nations as well,” Bharara said.

U.N. Secretary-General Ban Ki-moon is “shocked and deeply troubled” by the allegations, said his spokesman, Stephane Dujarric. The U.N. had not previously been informed of the probe, Dujarric said, but would cooperate if contacted.

The case followed the Sept. 19 arrest of Ng, 68, and an assistant, Jeff Yin, 29, for falsely claiming that $4.5 million they brought into the United States from China from 2013 to 2015 was meant for gambling or buying art, antiques or real estate.

Both men are charged in the latest case. Bharara said authorities continue to examine the funds connected to Ng, who prosecutors say has a $1.8 billion fortune, much of which he earned on developments in Macau.

According to the complaint, Ng, through intermediaries, paid Ashe more than $500,000 for telling the U.N. secretary general that a yet-to-be built multibillion-dollar U.N.-sponsored conference center in Macau was needed.

The intermediaries included Francis Lorenzo, 48, a deputy U.N. ambassador from the Dominican Republic, and Yin, who told authorities that Ng viewed the conference center as his legacy and made payments to get U.N. action on it, the complaint said.

Ashe, 61, also received more than $800,000 from Chinese businessmen to support their interests within the U.N. and Antigua, and kicked some of the money to Antigua’s then-prime minister, the complaint said.

The unnamed non-profit matches the description of the Global Sustainability Foundation. And while the complaint did not name the prime minister, Baldwin Spencer held the post at the time.

The foundation and Antigua and Barbuda’s mission to the United Nations did not respond to requests for comment. Spencer could not be reached.

The complaint said Ashe solicited bribes in various forms, including payments to cover a family vacation to New Orleans and the construction of a $30,000 basketball court at his house in Dobbs Ferry, New York, the complaint said.

From 2012 to 2014, more than $3 million from foreign governments and individuals was deposited in bank accounts controlled by Ashe, who spent the money on his mortgage, BMW lease payments and Rolex watches, the complaint said.

The complaint only charged Ashe with tax offenses, which it said are not covered by any diplomatic immunity he enjoys.

The U.N. general assembly presidency is a ceremonial one-year post paid for by the home country.

Bieber Brian, Lorenzo’s lawyer, said his client “maintains that he acted in good faith at all times and believed in the integrity of what he was told by those involved.” Ng’s lawyer, Alex Spiro, said his client committed no crime.

Yin’s lawyer had no immediate comment. Lawyers for the others could not be immediately identified.

In China, Ng sits on several government committees and belongs to the Chinese People’s Political Consultative Conference, an advisory body to the Beijing government.

Ng’s name previously surfaced in U.S. investigations into how foreign money might have been funneled into the Democratic National Committee before the 1996 elections, when it was working to re-elect President Bill Clinton.

Ng, who was never charged, stopped coming to the United States from 1996 to 2000 amid the probe, prosecutors have said.

Federal prosecutors in Brooklyn also have brought sealed charges against another individual linked to Ng, Yin’s lawyer Sabrina Shroff said at a Sept. 28 hearing. The status of any Brooklyn-based investigation was unclear on Tuesday. 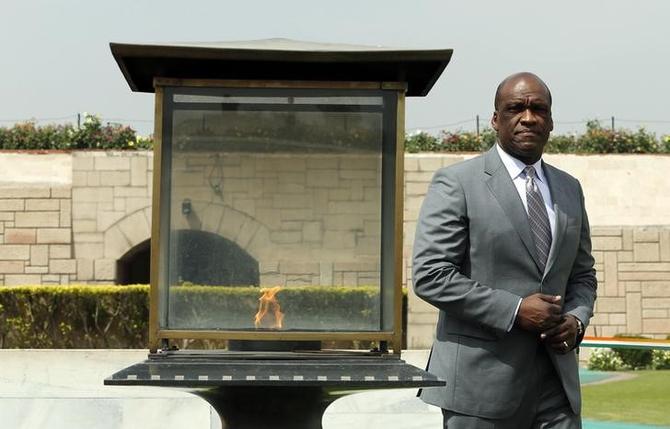